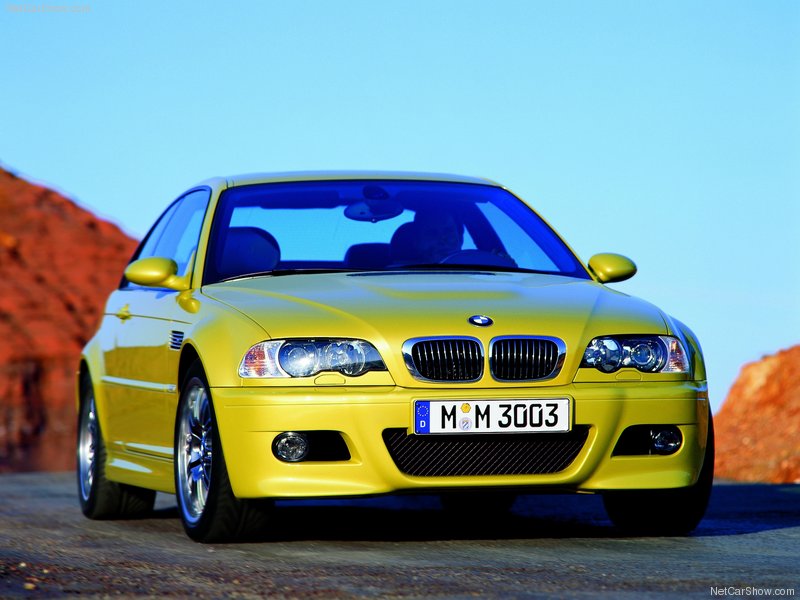 The engine of the E46 is an inline 6 cilinders. As with all ///M cars, the engine is designated by the ‘S’ letter (S54, to be precise). You can expect some classic ingredients of this type of engine: (i) horsepower figures above the 100 HP per liter (343 Hp delivered by a 3.2 engine); (ii) a high revving engine begging to be pushed (peak horsepower only comes at 7900 rpms); and (iii) a notorious lack of torque at low revs, with peak torque of only 37,2 Kgfm at 4900 rpms. The S54 engine was highly praised as one of the best naturally aspirated engines of its time.

The E46 M3 could be equipped with a manual gearbox or the semi-automated SMG (the clutch is automated in this last option), both with 6 gears. Do not get me wrong those who prefer the SMG, but I do not like the job done by BMW with this gearbox. In its agressive mode, the gearchanges are very strong and emotional, but far from efficient. Also, the SMG is not exactly the most reliable gearbox in the planet.

The coupé version of the M3 E46 weights about 1565 Kgs. As usual, looking strictly at the weight numbers do not do justice to a BMW. You need to examine how weight is distributed, which is very close to the 50/50 ratio between the front and rear axles, resulting in one of the most refined cars there is. The M3 is a rear wheel drive car as you would expect from a ///M.

So far, anyone with a bit of brain could look up online the data about the M3 E46, but how does it feel behind the steering wheel?

The first impression entering the car is that is feels a bit bigger than the E36, but much smaller than the E92. Everything seems a closer to the driver. The panels and instruments are quite simple and intuitive. All made in manner not to distract the driver. A very interesting function is the rev counter that contains lights that will fade as the car reaches optimum temperature, releasing more revs, assuring long term reliability for the engine. 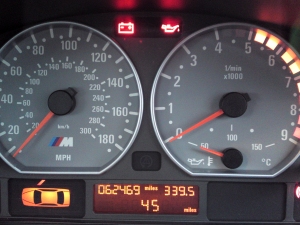 Once I ignite the S54 I cannot run away from comparing it to the E92 once again. The gear changes in the manual transmission and the clutch in the E46 seem more heavy and sensible to the driver’s inputs. The steering wheel feels also a bit tougher and more direct. In the usability aspect, props to the youger brother.

Although BMW says with pride that the V8 in the E92 weights the same as the L6 in the E46, similarities stop there. The S54 engine of the E46 feels much more rev-free compared to the newer V8. I dare to say that gear ratios in the E46 between first and third gears seem shorter than in the E92, doing a much better work in disguising the low torque figures. This is an old trick in the manufacturers’ book when using naturally aspirated engines.

In the first strong acceleration with the E46, I was reluctant to believe the newer E92 could be faster. On paper, the E92 is faster, but, in practice, I dare anyone to say this, specially in lower gears. On a straight line, the M3 E46 feels more focused and explosive than the youger sibling.

If until this point things were looking good for the E46, they would get even better. Driver’s cars must inform the driver exactly what is going on underneath it so they can be driven agressively. Few modern cars do this in an astonishing manner. The M3 E46 is exactly one of those. Any and all imperfections of the road are transmitted to the steering wheel. It is very easy to see and understand the space the car needs on the road.

Another incredible factor in the equation is how direct the steering responds to my inputs and the manner by which the chassis addresses my intentions. The car changes direction and takes corners in a breath taking way. The experience is very involving and the driver is deeply a part of everything.

If on one side the BMW M3 E46 is one of the most delicious cars I have come accross in my life, there is also a negative aspect; or better, one that requires attention.There is not much of a filter between the driver’s commands and the way the car responds. Although the E46 M3 is not a small track oriented car, the driver dresses it in a manner not seen in vehicles this big. This means that there is not much of a room for errors. Doing something stupid in such a simbiotic ///M car is not difficult, specially when the “sport” button is activated. Definately not a car for beginners.

This agressive side of the M3 46 is to me the main difference compared to the E92. The younger car is much more refined and with more filters between the driver’s inputs and the car’s reactions. The trade-off, however, is that the E92 has less drive feel and way more of a GT personality.

Another point I have to praise is the manual gearbox. Definatelly, any dual clutch automated gearbox will be faster, but the M3 is one of those cars where the act of driving is much more important than being faster than the other guy. It is a car that represents very well the pleasure of driving.

The M3 E46 is not only an excelent car for its time. It is still astonishingly good for modern standards. There may be faster options on the straight line, such as a regular BMW 335i or 135i, but based on my experience, what you lose in terms of performance, you gain in experience with an E46 M3.

I truly believe this car will be a classic in the upcoming years. The L6 engine naturally aspirated was always something BMW was really good at and this is simply the best engine of this kind the brand has made. Driving a car with such engine is an experience every petrol head should have. I place it as one of the most incredible experiences I had in my life.

This is one of those cars that leave a trace in the life of those who owned it. One of those cars owners will keep the stories and episodes really alive in their mids. It reminds me of an era in ///M cars when a purchase decision was the choice of a lifestyle. A time when the ///M owner had pride in its toy and AMGs were just a reason for jokes.

I always love to say that the M3 and all of its generations represent the life phases of a man. The E30 is that kid around 12 years old, full of energy, but without much power to do a mess. The E36 is more of a teenager with its constant mood changes who begins to understand its force, but not in such a refined manner. The E46 is that guy around twenty something years old, physically mature, with much strength and energy, but not much of a brain. The E92 is that grown up around thirty, probally married, that does not need to go out partying every night and getting drunk to have fun, probably gained a little weight also. Curiously, the M3 turned thirty years old on 2014. Coincidence? Let’s just hope the M4 continues the legacy.