I thought a long time whether this post should be a review. My choice is to always to talk about my experience driving cars. Nevertheless, when it comes to the opportunity of being on board of something special, you don’t think too much, just appreciate the opportunity.

I believe that all of those passionate about sport cars in Brazil are aware of the existence of the only Pagani Zonda F we have here. Thanks to a great friend, I had a chance to place my large ass on the passenger seat during a Sunday afternoon.

I rarely get out of a car impressed when I am in the passenger seat, but, for everything, there is a first time.

With the Pagani, nevertheless, it is not a question of being “impressed”, but rather of finding a reference. What do you compare a Pagani to? Ok, it’s a car… it has an AMG Benz engine, V12, 7,3 lts, in central position. Power output is around 650 HP. Torque is above 70 NM. All of that distributed in a car that weights about 1,2 tons.

Without taking in a ride in a Pagani, your best guess to figure out what a Zonda is all about would be paying attention to the car’s design. Either by looking at the interior or exterior of the car, it seems that the Zonda was born from an abstract wild dream of a teenager. Well, not exactly a teenager, but an old fellow – Horácio Pagani, who was born in Argentina, but domiciled in Italy, where, after working several years at Lamborghini, he decided to open his own company (Pagani Automobili), bringing to the real world the surreal Paganis.

If you’re still unconvinced by the looks, you can pay attention to the exhaust noise coming out of the thing. The quad pipes blast through the middle of the car’s rear end. As soon as the engine comes to life, a marvelous sound shouts to all corners. A sign of something more than just an engine… perhaps something with a soul of its own waking up.

If you came this far, you must be impressed (I hope).

I have to be honest: having seen this “surreal thing” blast through me for the last 4 to 5 years made me get used to its omnipresence (presence would not be enough). Things would change a lot after a ride in it.

Getting inside the Zonda F is not a simple task. There is huge chassis’ bump (such as in the Merc SLS). The seats, made of ostrich leather, are very refined and transpire how exotic the Zonda is, but are far from being comfortable. They are firm and stiff.

The clocks are as futuristic as you can see from looking pictures in the Internet. It is all very artistic and dramatic. It makes you even question whether the Zonda is a work of art or a sports car to be taken seriously (i.e “Spyker”). As I would find out in a couple of seconds, when the revs go up and the Zonda starts moving, you totally forget any other feature of the car. For lack of better words, when the Zonda goes, things get wildly serious.

It is a monstrosity of torque being thrown over the asphalt, which must be tamed through the manual gearbox, clutch and accelerator. The traction control is either fully on, holding back all your dumbest intentions or turned off, telling to go “F**** yourself”. The rear tires are gigantic, but seem like nothing when you go w.o.t in lower gears. Nevertheless, be it because of the driver’ skills or not, the Zonda is very well sorted out machine, making it easy to control it even when the tail decides to have a mind of its own. It is an amazing beast!

I was never inside a car which responds to the driver’s inputs so directly. I don’t know if I would be able to dominate the Zonda in my first try behind the wheel, but I am sure that after a few hours of practice I would laugh my ass off. The car’s dimensions are huge, but the view from inside is magnificent, because the cockpit is like a “glass bubble”, allowing you to see spots where you would never see in a normal car. 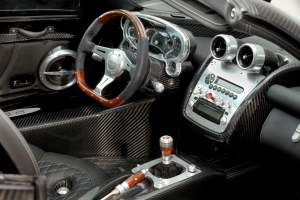 However, if there is one thing the Zonda tought me was the real meaning of downforce. Much more than mere fashion, the Zonda’s design is all about function. In several statements, Mr. Horácio Pagani says that the car has the same level of safety at 120 mph or at 180 mph. Based on my experience, I couldn’t agree more. The Zonda has such a great downforce that it is difficult to explain with words. The sections of road where we took the car are the same spots I usually test the cars I own or drive. I know there are bumps and holes out there that would make you ready for take off.

The Zonda has a firm suspension, but at the same time it is very versatile to go through normal roads. This very well sorted out suspension, working jointly with the cars aerodynamics, produce a very interesting effect. Yes, initially, you have a feeling that the car will take off when going above certain bumps, but immediately, as soon as you think things will go wrong, something pulls the car to stay as low as possible to the ground, to the point you actually hear the chassis scratching against rough surfaces beneath it.

It is an extraordinary feeling. In no moment you have a sensation that you are simply going too fast and things can get out of control very quickly.

On a straight line, there are less exotic and expensive cars that will give the Zonda F a run for its money, such as a slightly tuned up Nissan GTR or Porsche 911 Turbo. Nevertheless, in terms of experience, nothing can be as rewarding as the Zonda F. Not even close.

In a circuit, I bet that if you take 10 professional drivers and ask them to spend an afternoon driving it, I doubt any of them will opt for a more modern sports car, filled with technology. It is not the type of car that you get used to it fast or dominate it easily, but, it is an exquisite shot of brutality and docility; of immediate and direct responses, with a incomparable safety feeling. Although I have not driven it, I had the chance of steering the car and shifting some gears, all very precise and just a little bit harder than a normal sports car. It is as if the Zonda was born a race car and somebody decided to tame it for the road.

Lamborghini, Ferrari, Porsche, BMW, Audi, Mercedes etc. honestly, the experience is nothing compared to a Zonda. There are sports cars, sedans, hot hatches, SUVs and track focused cars… then… there is the Pagani. There is a bunch of cars that I wish to drive, but, maybe, this small ride on the passenger seat made me understand why hyper cars cost so much… they are totally special. Nothing comes close to the racing feel of a Pagani Zonda. It is incredible. It is one of those stories that, as a gearhead, you gonna tell it for years to come. Definately bucket list stuff. 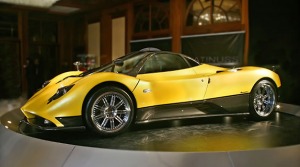